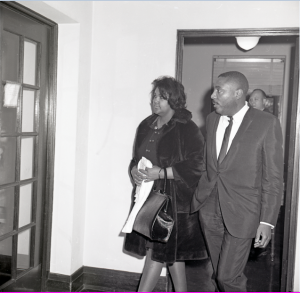 In the fall of 1966, comedian, actor, and activist Dick Gregory and his wife Lillian were charged with illegal fishing, when they participated in the Native American Fish-In campaign to assert treaty rights. In this photograph from late November, the Gregorys enter the Thurston County Courthouse on Capitol Way. The trial attracted national publicity. The Gregorys were found guilty on December 2. Photograph selected and captioned by Deborah Ross on behalf of the Olympia Historical Society and Bigelow House Museum. More information is available at olympiahistory.org.