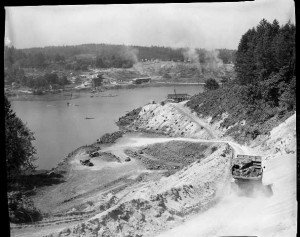 During the long planning period leading up to the construction of Interstate 5, several routes were considered, including one that would have tunneled underneath downtown Olympia. Ultimately, it was decided to site the freeway in a wide arc around the capital city, facilitating connection with Route 101, but requiring the demolition of most of downtown Tumwater. This photograph from 1956 shows the beginning of the construction of the bridge spanning the upper end of Capitol Lake. Photograph selected and captioned by Deborah Ross on behalf of the Olympia Historical Society and Bigelow House Museum. Merle Junk photograph, Susan Parish Collection, Washington State Archives, 1956