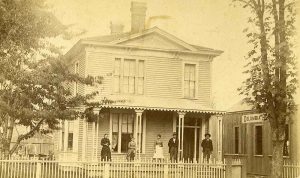 The Columbia Hotel was built in the mid 1800s by early Olympia settler John Clark, at what is now 114 Columbia St. NW. At the time, it was on waterfront and popular with politicians, lobbyists, and travelers. The hotel was acquired by George Carlton and renamed the Carlton Hotel; later rebuilt and enlarged. The hotel lasted until at least 1940, though its status declined due to its proximity to the deteriorating Tenderloin District north of State. Image selected and captioned by Deborah Ross on behalf of the Olympia Historical Society, olympiahistory.org. Courtesy State Capital Museum collection, Washington State Historical Society