This blog entry from Steven L was captured by the Wayback Machine from the now-defunct OlyBlog.net website. The capture URL is https://web.archive.org/web/20160412032816/http://olyblog.net/capitol-park-apartments

Although I called them Capital Apartments in a recent post, apparently they were also known as the Capitol Park Apartments.

Shortly before they were demolished to make room for the ever-growing Capitol Campus, Charles E. Anderson and Jerrold F. Ballaine of the firm Anderson & Ashburn appraised the fair market value of the units (Nov. 1, 1969) at $425,000.

I recently came across a copy of their report for the GA: Appraisal of Property Located at 1306-1318 Capitol Way, Olympia, Washington, Capitol Park Apartments.

Here are some extracts of their description. Notice the authors have one name for the place on the previously mentioned title, but another in their narrative:

The buildings are in fair condition for their age and both are colonial design. Roofs are flat, built up tar and gravel. The basement of the south building has some 60 lockers and a low pressure steam heating plant consisting of a Birchfield Boiler and Ray oil burner which burns heavy fuel oil. The basement of the north building has 16 garage stalls.

The ground floor of the south building has a large laundry room and drying room and an ample sized storage room. There are also 6 apartments in this floor. The public halls in both buildings are wide and carpeted.

There are a total of 61 apartments and 218 rooms in the two buildings … All apartments have oak floors in the halls, living rooms, dining rooms and bedrooms.”

Old Cap Way was never quite the same after these two buildings, along with the old OHS, were torn down. I have attached some interesting floor plans, photos, and list of residents in the twilight time of this apartment house.

Those of you who attended Roosevelt School in the Ike/JFK/LBJ era will recognize one of our 5th grade teachers in the list, who was retired by 1969. I believe she lived to be a century old, something that might not have happened if my rotten class had not convinced her it was time to retire early if we were a sign of things to come. She was a nice person who did not deserve to have a group of little demons like us, but getting out of the classroom early might have prolonged her life in the long run, so perhaps we did her a favor. I hope so.

Oak floors. Such a shame. 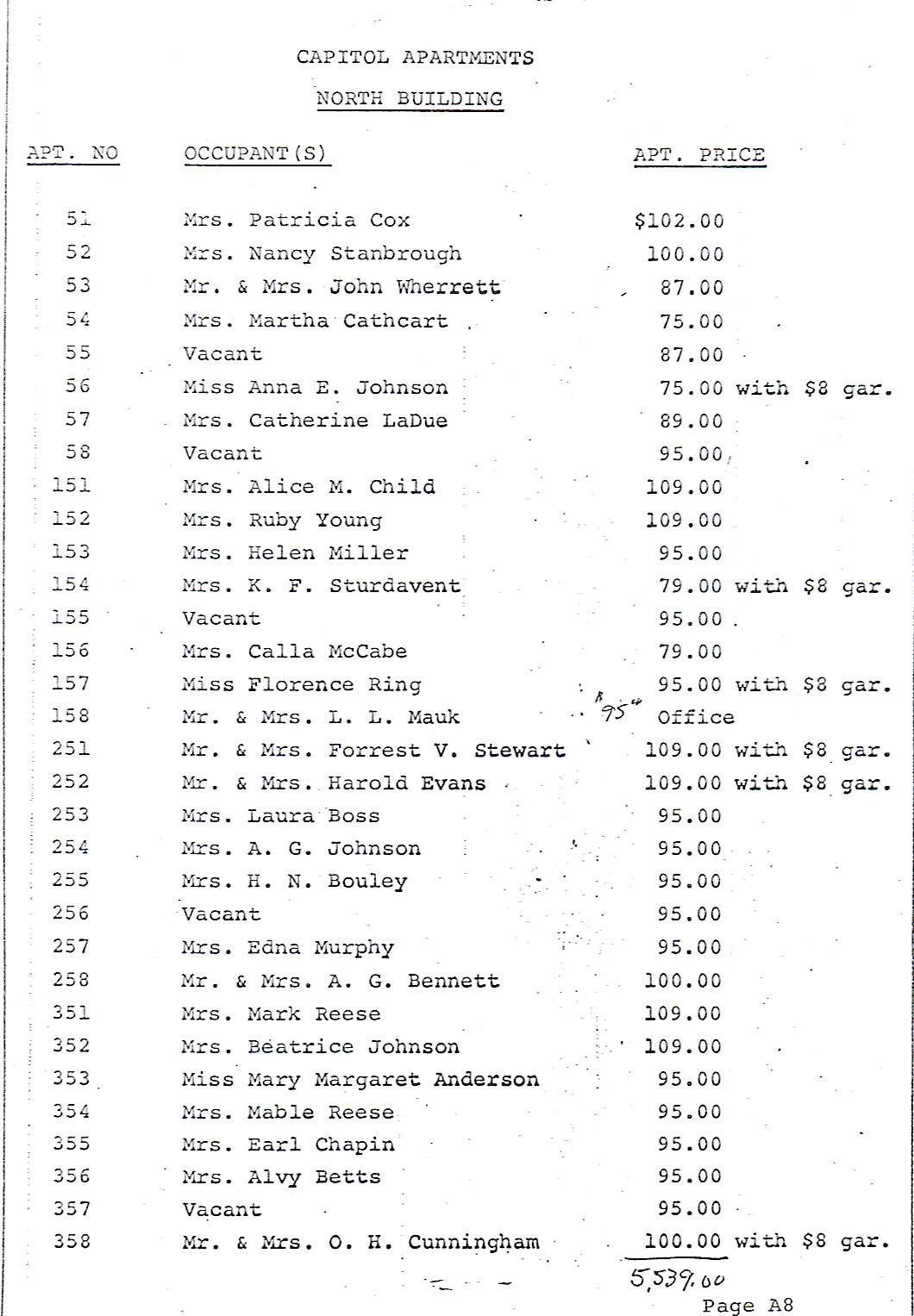