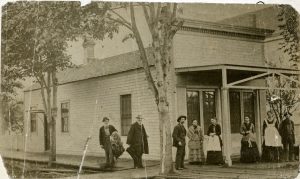 In 1853, Charles Burmeister established one of the earliest saloons in Olympia. It was located on Fourth Avenue and Washington Street, where the State Theater is now. This photograph from the 1860s shows Burmeister, his wife, and others in front of the saloon. The building was later moved further west on Fourth Avenue but succumbed to the extension of downtown’s masonry buildings in the early 1900s. Photograph selected and captioned by Deborah Ross on behalf of the Olympia Historical Society and Bigelow House Museum, olympiahistory.org.