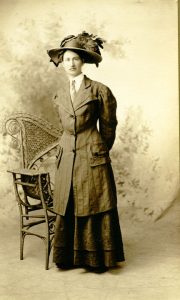 Washington State and Olympia were in the forefront of the push for female suffrage in our state and nationally. Pictured here is prominent Olympian Bernice Sapp, while she was attending the National American Woman Suffrage Convention in 1909. Held in Seattle simultaneously with the Alaska-Yukon Pacific Exposition, it was a major event in the campaign for successful ratification of permanent voting rights for most Washington women in 1910, ten years before the national 19th amendment. Image selected and captioned by Deborah Ross, Olympia Historical Society, olympiahistory.org.