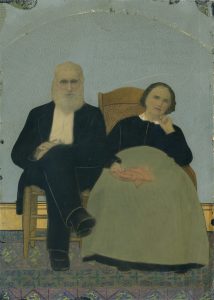 This painting of Kamilche, Washington settlers Benjamin Franklin Kennedy and his wife Elizabeth Ann Kennedy is based on a photograph that was taken of members of the extended Kennedy and Simmons families. The Kennedys were early settlers in Mason County: Kennedy Creek is named for the family.   Image selected and captioned by Deborah Ross on behalf of the Olympia Historical Society, olympiahistory.org.

Painting based on a photograph from around 1900, Courtesy State Capital Museum collection, Washington State Historical Society