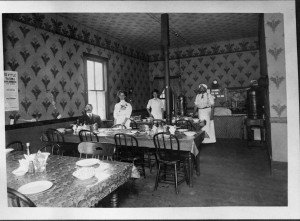 The Bayview Hotel was located on Third Avenue (now State Street) in Olympia. Third Avenue was the dividing line between the “respectable” part of downtown and the Dead Zone, or Tenderloin District. As suggested by its name, the hotel was located on what was then waterfront on the north side of the street. In this photograph, from around 1900, the staff and proprietor are awaiting customers in the hotel’s restaurant. Photographs selected and captioned by Deborah Ross.