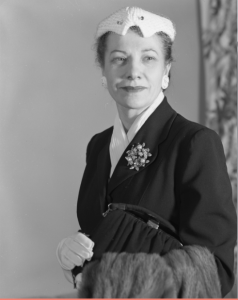 Olympia’s current mayor, Cheryl Selby, is the third woman to hold this office. The first, Amanda Benek Smith, held the office from 1953 to 1960. She was also the first female mayor of any state capital. Smith was mayor during the siting and construction of what would become Interstate 5, which she proposed be routed through downtown Olympia, via a tunnel or overpass. (The route that was adopted, over her objection, destroyed downtown Tumwater.) Smith also banned gambling in downtown Olympia, supported the planting and preservation of trees in the cityscape, and made numerous improvements in city infrastructure. Amanda Smith Way is named after her. Photograph selected and captioned by Deborah Ross on behalf of the Olympia Historical Society and Bigelow House Museum. More information is available at olympiahistory.org. Unknown photographer, 1954, Susan Parish Collection, Southwest Regional Archives