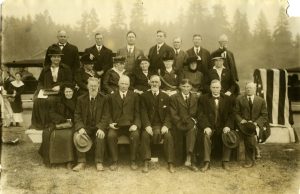 A group of local citizens, pioneer descendants, and historians pose for their photograph at the 1916 dedication of the Oregon Trail Monument in Grand Mound. The monument, shown draped in a U.S. flag, was one of several erected by the Daughters and Sons of the American Revolution to commemorate the historic mass migration.  The monument still exists, on Old Highway 99.