Olsen and Fenske: The History and Memories of Priest Point Park

By Winnifred Olsen and Lois Fenske 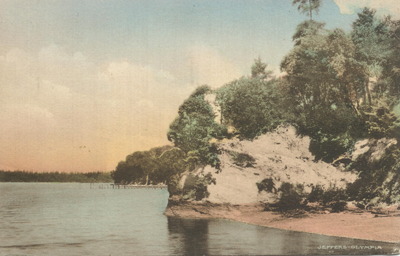 Priest Point Park, located about a mile north of downtown Olympia, has a colorful history. The forested area and beach were once the site of an Indian village. Then came the European and American explorers, fur trappers and American settlers in 1845 and 1846. In 1848 an Oblate Catholic mission, which lasted until 1860, was established on the site . Developers took over for many years with big dreams that finally fizzled by the turn of the century. In 1905, the City of Olympia resolved the real estate controversy and purchased 240 acres and a mile of waterfront for a public park. Local residents rallied to donate labor to clear pathways and build a park – a family park for all ages to enjoy.

Then, and now, no admission was charged to use the park – a rarity, indeed. 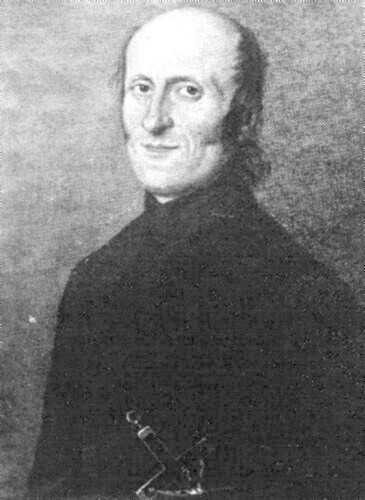 My family, the L. E. Castle family, have been life-time users of Priest Point Park. I cherish early childhood memories of going to the park, special memories of grade school days, as a teenager, a young parent, a grandmother and a great-grandmother.

In my youth we lived on the Eastside near the Washington School. On some summer evenings, but mostly on Sundays, we would drive to the park to play on the swings and slides, visit the zoo, the beach and, perhaps, roast a hot dog in one of the open cement stoves.

Dad would push my sister and me on the tall “big kids” swings. We could go much higher than on the swing hanging from the apple tree in our back yard. We also enjoyed the green painted wooden gliders that swung more sedately back and forth. We often had to stand in line to use the covered gliders – everyone wanted a ride – mothers even sought them to soothe their babies.

We loved to visit the zoo, which was located on the south side of the park, at the foot of a slight decline. A row of wooden pens housed a variety of animals – changing from year to year. There were wolves, foxes, coyotes, raccoons, deer and several bigger animals. I believe one summer there was a live bear on exhibit.

The most memorable animals, of course, were the peacocks! No one can talk about Priest Point Park without first commenting on the many peacocks that roamed throughout the park. There were always Oh’s and Ah’s when one of them opened up its tail feathers to form a beautiful fan. There would be contests and “show-offs” who couldn’t resist trying to imitate the shrill “cry” of the peacocks. A most unique sound to mimic. 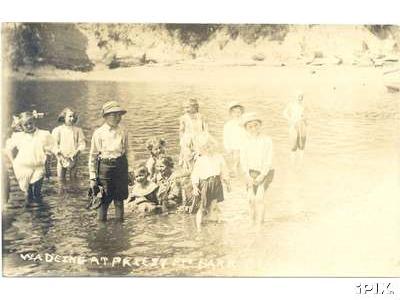 As youngsters we begged to go down to the beach to wade, to look for shells and unusual rocks – especially, flat, smooth, round rocks for dad to “skip” across the gentle waves. He also taught us about the tides.

Before we were the “Castle family,” my parents and their generation obviously enjoyed the park. Somewhere in my photo collection there is a snapshot of my dad on a horse in the park (1915). Standing nearby were his brothers and their spouses dressed in their Sunday-best suits and hats!

Dad loved the park. On his last outing, before his death, he rested on an army cot beside Kitchen 3 and using his former logging experiences identified the various species of old growth trees towering above him for all of us to enjoy.

In my grade school days (1928-30) we had several class hikes to the park from Washington School –duly chaperoned. Not chaperoned, about 8th grade, were a couple of visits to the Priest Point Park “swimming hole.” A narrow dirt road wound off East Bay Drive to a pond created by a little creek. The water draining into the bay was dirty, dirty! There was no place to change clothes. Not brave enough to dress in the bushes or tall grass, we must have worn our swimsuits to the park. Anyway, the “hole” didn’t last long. By high school, we chose to go to the local lakes.

The Kiwanis Feed and other Big Group Picnics

My uncle, F. Ray Klumb, founder of the Capitol City Creamery, lived in the last brick house before the park entrance. Each summer he put on a big “clam feed” for his fellow Kiwanis members. One year, my sister, Dottie, and I got to help his son, Harold, haul huge tubs of steaming clams from their house to the park in an old Dodge touring car. We felt special to be a part of the event. The food was served on the big long tables set in permanent rows under the tall trees in the main part of the park. For years, many fraternal organizations, businesses, and families counted on these tables for their annual celebrations.

Hanging near these tables were the “notorious” rings. Men of all ages would challenge each other like “toreadors at a bullfight,” betting to see who could last the longest or go the farthest, hand over hand on the equipment.

Long gone, the rings and tables. The area is serene. Individual tables are scattered under the same trees making a more romantic setting.

After covered kitchens were built, smaller picnic groups have vied for the convenience of sinks, running water, and a roof for shelter from rain. Groups sent out a scout to hold down tables for their picnic. Happily, today, part of the anxiety about securing a favorite spot is relieved. Reservations at four of the kitchens can be made in advance.

Every summer my sister, Betty, would bring her two boys and two daughters to Olympia. With her two boys and my two, no corner of the park was unexplored. When the trail to Ellis Cove was completed and a small bridge built across the deep, gooey mud, we enjoyed this more primitive north park. The boys dared to scramble across the warning logs to climb the steep banks by hanging on the Madrona tree roots. Adults shuddered and turned their attention to the many wild native plants – and the many large slugs along the pathway. From a visiting naturalist, we learned that Northwest slugs are even bigger than those in North Carolina!

The boys to this day (in their fifties and sixties) share memories of sitting on the two Civil War canons facing toward the bay and wading in the saltwater for jelly fish and baby crab. They lamented they could not go swimming on the east side of the bay. Swimming, even then, was “not recommended,” or more to the point, “not allowed.”

Priest Point Park was historically noted for its two-story, green and white chalet facing west toward the water. The Swiss-styled building was the gift of Leopold Schmidt in 1905. The building had been part of the Olympia Brewing Company display at the 1903-04 Lewis and Clark Exposition in Portland. 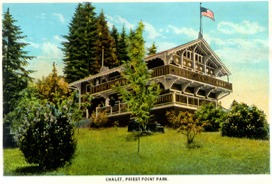 The pavilion had a caretaker but was open only on special occasions and a few Sundays. I remember the “zoo” inside. There were large stuffed owls and other birds as well as large animal heads mounted on the walls. Most memorable, again, was a large black bear mounted on “all fours” – the same size and shape as “Pepper” our Olympia High School mascot. The building was demolished in the early 1950’s.

In 1990 I had the opportunity to share a babysitting job with my granddaughter visiting from Hawaii. We entertained the younger nephews in the park’s popular wading pool where the zoo cages used to be and where once there was a small ice cream store. Another granddaughter reminded me that I had frequently taken her to the pool thirty-five years ago.

A more recent glorious memory was made in 2005 when my two sons brought their families to the park to celebrate my birthday. With two sons, four grandchildren and six great-grandchildren we had a joyous picnic near the colorful playground equipment. We all were impressed with the brightly painted riding and sliding equipment and grateful for the implanted mats to help toddlers land (or fall) safely on the ground.

One doesn’t dare overlook the Rose Garden on the east side of East Bay Drive. An attractive cement bridge now connects the two sections. For many years there was only a wooden footbridge.

Noted for its well-manicured flowerbeds and its handy-equipped kitchen, this section has long been in steady demand for small group parties. It is also highly praised and appreciated by visitors limited to wheelchairs and walkers.

Newer yet, are underused picnic spots hidden in the woods to the east. Private spots appear suddenly around every bend in the winding road and a surprise – another covered kitchen – and a gliding swing! 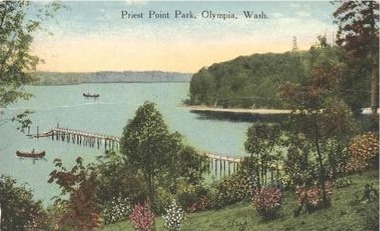 Who could ask for more? How fortunate we are to have such a beautiful, usable park within our city limits! A park that keeps serving generation after generation – with no admission charge. I truly believe Priest Point Park is a “hidden Jewel” of the Pacific Northwest. Taxes? Well spent! May this park – including the unforgettable memory of its peacocks – long survive!

Winnie Olsen was born in Olympia in 1916, where she has lived her entire life. Her contribution to education and history and her service to the community are countless.