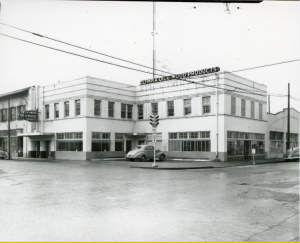 The Rockway-Leland Building was built in two stages between 1921 and 1941, the later portion in an Art Moderne style designed by Joseph Wohleb.The building was the home of Olympia Oil and Wood Products, and was named after the company’s owner and manager. The building was also once the home of Olympia’s first radio station, KGY. Studios on the second floor are acoustically perfect, and still the home of a local radio station. It once sported a 150 foot tall tower on the roof, visible in this photo from about 1941. Photograph selected and captioned by Deborah Ross on behalf of the Olympia Historical Society and Bigelow House Museum. More information is available at olympiahistory.org.Vibert Jeffers photograph, around 1941, Susan Parish Collection, Washington State Archives