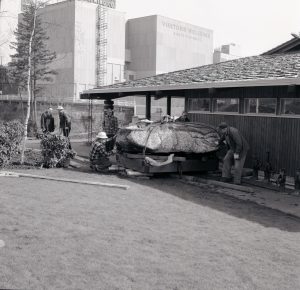 A group of workers carefully places a large stone, called a petroglyph, at the Olympia Tumwater Foundation’s headquarters at Tumwater Falls Park. The stone, inscribed with multiple tribal symbols, had been transported from a beach on Harstine Island in 1963 and donated to the Washington State Historical Society. In 2008 it was returned to the Squaxin Tribe and is now at the Veterans Memorial at the Tribal Museum near Shelton. Photograph selected and captioned by Deborah Ross on behalf of the Olympia Historical Society and Bigelow House Museum.