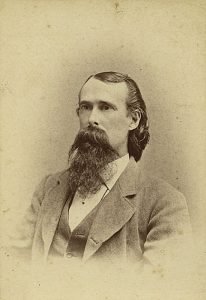 Peterfield Turpin was an early American settler in Olympia, Washington Territory, arriving in 1858. President Buchanan appointed him to be a Land Office surveyor, and he held several other public positions throughout his long life. His home was at the northwest corner of Legion and  Capitol (then called 6th and Main), kitty-corner from Sylvester Park.  Image selected and captioned by Deborah Ross on behalf of the Olympia Historical Society, olympiahistory.org.