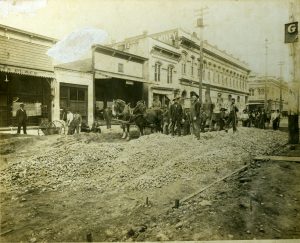 As bicycles and automobiles grew in popularity in the late 19th and early 20th century, the muddy streets of Olympia presented a significant navigation challenge. In 1908, the city agreed to pave its downtown streets. The project consumed the following spring and summer. Here we see workers paving Fourth Avenue. The buildings in the background are the Mottman Building and the Chambers Block at Fourth and Capitol, still in existence. Image selected and captioned by Deborah Ross, Olympia Historical Society and Bigelow House Museum, olympiahistory.org.