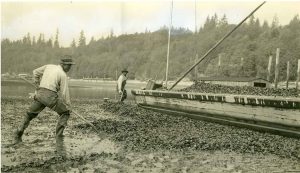 Oysters have been an important food source for our area’s residents since well before the arrival of non-Indigenous Americans. In this photograph from the early 20th century, harvesters are working at low tide to shovel oysters into a nearby scow. At the time this photograph was taken, harvesting was done nearly exclusively by Japanese immigrants. This process would later be replaced by less back-breaking methods. Image selected and captioned by Deborah Ross on behalf of the Olympia Historical Society, olympiahistory.org.