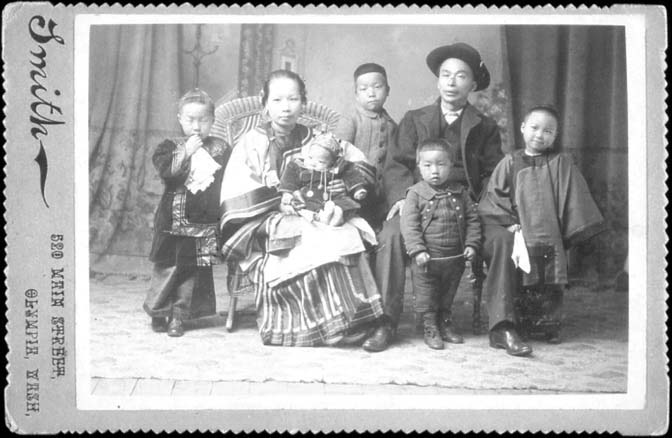 During the latter half of the 19th century, the Puget Sound region received an influx of settlers from around the world. Among them were immigrants from southeast China Many came to earn money to send to their struggling families. Others arrived planning to stay and make a new start. These men and women provided a much needed labor force in constructing new towns in the region, including Olympia.

Long before the arrival of the railroads, Chinese looking for new opportunities began arriving in Olympia. In 1852, the first edition of the Columbia (the first newspaper published on Puget Sound) carried an advertisement for Edmund Sylvester’s Olympia House Hotel, which boasted an “…accomplished Chinese cook, who comes highly recommended by the American Consul at Canton.” By the early 1860s, the annual celebration of Lunar New Year by Chinese in Olympia received regular mention in the local press:

Chinese New Year.- The Chinese Residents of our town kept up the a continual popping of firecrackers on Tuesday last, in honor of the commencement of new year. John is about ten months ahead of us in this anniversary and celebrates in a much more becoming way. His firecrackers and strong tea take the place of firearms and strong whiskey sometimes used by his more civilized brethren; and their hospitality on such occasions is immense. They kept a supply of ‘hardware’ for the ‘mellicans’ but confined themselves mostly, we believe, to their tea.

Before the arrival of the Chinese, most of Olympia’s streets existed only on paper. Hired by the community as contract laborers, these men built bridges, pulled stumps and graded streets in and around what is now downtown. Chinese also worked at many local manufacturing concerns, at lumber camps, and were employed extensively in the local oystering industry. Some also served as crew on the early steamers that served as the main form of transportation on Puget Sound. 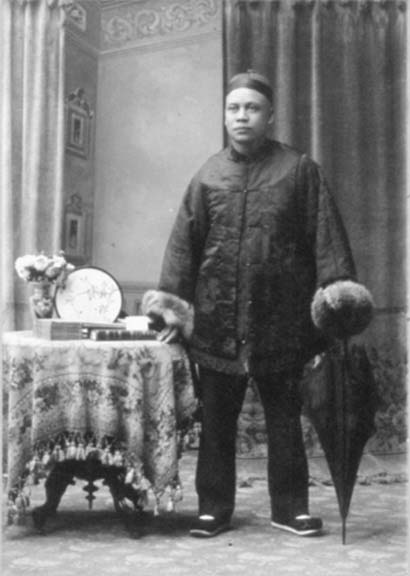 Chinese also found other opportunities. Many became cooks or house servants for affluent families. Chinese men operated commercial hand laundries, working long hours and living in their places of business to save money. Others cultivated vegetables in gardens near town and delivered them door to door, the first locally grown commercial produce.

Chinese sojourners with the same surname tended to congregate in the same towns. Early on, Olympia emerged as a “Locke town.” Family Associations, based on surname, language and village ties, were the foundation of early Chinese American communities. Generally, those sharing the same surname were from the same vicinity in China. In the case of the Locke clan, this was the Toisan county region of Guangdong Province, southeast China.

Most early Chinese immigrants were male. In the absence of traditional family structure they relied on the services provided by the Family Associations to secure a place to live and employment. In turn, they paid dues to the Association to support the various services it provided.