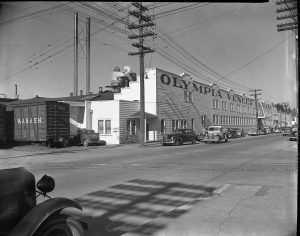 The Olympia Veneer Company was founded in 1921 as a revolutionary example of a cooperative company, owned by its workers. Located at the far northern tip of the port area, it also developed techniques that were soon copied by other manufacturers. The mill employed many Scandinavian immigrants who had come to this area in the early 20th century. Photograph selected and captioned by Deborah Ross on behalf of the Olympia Historical Society and Bigelow House Museum.