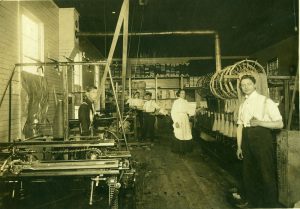 Olympia Knitting Mills was an important contributor to Olympia’s economy in the early 20th century.  The factory was located on 6th (Legion) Avenue between Jefferson and Cherry, and created woolen sportswear and outwear to be shipped throughout the United States and beyond. Pictured here are co-owner Sol Meyers and his crew in the winding room. Finished garments can be seen on shelves at the rear. The building still exists. Photograph selected and captioned by Deborah Ross on behalf of the Olympia Historical Society and Bigelow House Museum.