Miller: Centennial of the Wilder and White Plan

Centennial of the Wilder and White Plan for Capitol Campus 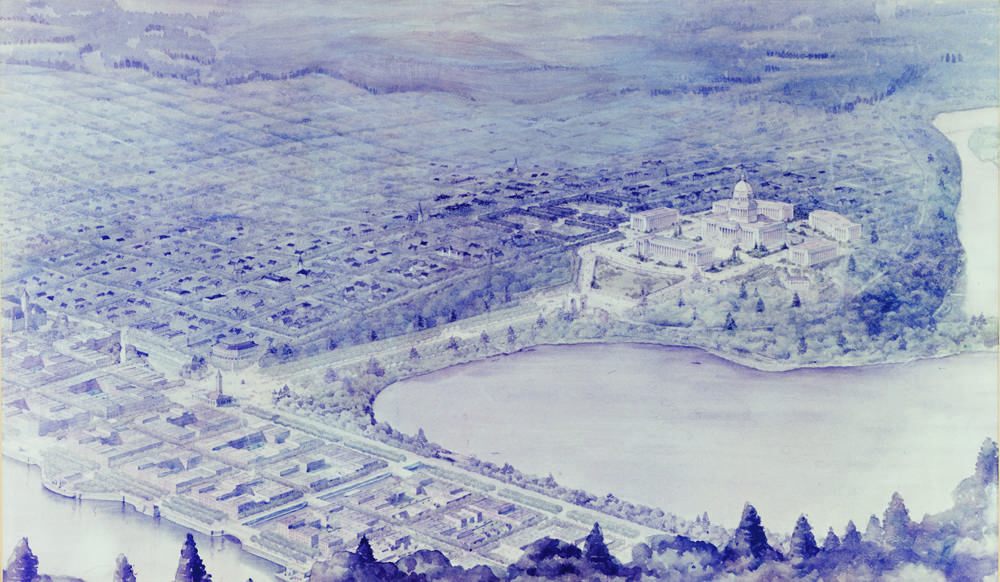 A century ago, on both coasts of America, the curtain of history was about to go up on a transcontinental drama still being played out today. In the West the setting could be found on a bluff above the muddy tide flats of the Deschutes River in Olympia. In the East the setting was the midtown-Manhattan office of two young architects with a dream and an ambition that propelled them to historic achievement. That dream and achievement involved the design and construction of Washington’s classical and monumental state capitol campus in the style of the City Beautiful movement in 1911.

Of special interest in the Washington drama is the initial, exciting frame of mind of the New York architects Walter Robb Wilder and Harry Keith White. They had started out together on big projects at the New York City firm known as McKim, Mead and White (no relation to Harry). Now in their mid thirties and entering a new partnership, Wilder and White were about to begin their stunning 18 years of service to Washington, one of the youngest states in the Union.

In the spring of 1911 these young partners entered a national competition for the selection of architects to develop a plan for Washington’s proposed capitol campus. In May, Harry White’s overnight note to his bride-to-be, Blossom Randolph in nearby Plainfield, New Jersey, confirmed the spark of this memorable moment:

At six….Got to the counter on time with our best

Wilder and White incorporated five design principles into their plan for the State Capitol Campus. These principles include:  (1) the City Beautiful Movement, (2) the Capitol Group of buildings, an unprecedented design of separate legislative, executive, and judicial buildings to look like a singular Capitol building when viewed from Budd Inlet, downtown Olympia, and the Fourth Avenue Bridge, (3) the borrowed landscape of the Olympic Mountains and Budd Inlet to frame the design (4) the northern orientation of the Capitol Group and Campus to Budd Inlet and the Olympics and (5)  a lake to reflect the beautiful buildings on the bluff.

On August 3, 1911 the competition judges and the State Capitol Commission unanimously selected Wilder and White’s proposal as the winning concept for Washington’s new state capitol campus. The New York architects not only captured the crown with their group building plan but also the separate commission to design the first building in the set, the Temple of Justice.

In an August 29, 1911 “Report of Group Plan” to the State Capitol Commission the architects concluded that “a tide lock would form a lake and the whole effect would be visible from most parts of the city as well as from the sound.” This part of the Wilder and White plan was delayed by World War II but became a reality in 1951 with the creation of Capitol Lake. The promenade from the bluff down to Capitol Lake and out to Budd Inlet was constructed in the 1990’s during the first decade of the 21st Century with the Washington State Law Enforcement Memorial, the North Capitol Campus Trail, an amphitheater, the Arc of Statehood from the Western Washington Inlet to the Eastern Washington Butte with thirty-nine county commemorative markers, and the City of Olympia’s interactive fountain on the Isthmus.

From the beginning of 1911, it was immediately apparent that the success of the project would depend not just on partners Wilder and White but also on their endless consultations with engineers, a carefully selected sculptor, and numerous vendors. Another crucial element would be the hard work and personal motivation of hundreds of craftsmen. Sparked by the architects’ own inspiration, a responsive feeling grasped the minds of the supporting cast, “the circles of planners and builders” who became focused on the new state project of the Washington State Capitol Campus.

In January 1913 Wilder touched on his own initial thoughts in a short article for Pacific Coast Architect. Said Wilder, in part:

In any state capitol, there is more at issue than

is at once obvious. Far above excellence of detail,

of plan and evaluation is the expression of the dignity

of the state….. it should be characteristic of the

expressive of the State of Washington. Its location

at the head of Puget Sound, with water and mountains

in every direction, makes it distinctive beyond most

capital cities. What is true of the city is particularly

true of the sites elected for the capitol buildings themselves.

The problem is to preserve [and enhance] this expression……Olympia being the state capital, the people

of the whole state are vitally concerned…..public

opinion should be aroused to protect [the new

The architects’ dedication to their Washington project was certainly challenged in the next decade. The initial decision was to build the first unit, the Temple of Justice, “in brick,” leaving its sandstone exterior facing till the end. World War I and economic problems intervened. Half a dozen years passed before the classical judicial building was finished. In this period, the source of quality sandstone was established at the Walker Cut Stone Company in nearby Tacoma. Walker’s key quarry was in Wilkeson, a coal-mining town near Mount Rainier.

In the 1920’s one of Walker’s senior craftsmen was a stone carver named Alexander McKenzie Munro. Having been born in Scotland, at age 13 he grabbed the chance to become an apprentice stonecutter on the Scottish Castle in Beauly. Then, as a new journeyman at 19, he bonded with a group of young Scots coming to America “to build a better life.” The Scots were recruited to work on the new Texas capitol, but they backed off when labor problems developed. After stone jobs in Kansas and Denver, they headed for Seattle. There in 1889 the catastrophic “Big Fire” spelled opportunity.

When in his 50’s Alex Munro joined the Walker Cut Stone Company to work on the Washington State Capitol project, his stone carving kits included a remarkable 600 chisels, mallets, and various specialty tools. His most important assets, however, were his know-how and his leadership gathered from long years in the trade. Alex was at the apex of his career as a stone carver, superbly ready for the grandest, most honorable and most distinctive project he had ever seen. He would be capping his active years by working on the Washington State Capitol.

In the 1920’s a dramatic variety of carvings was specified for the structure. Every day, as Munro worked on the ornate stone petals and figures-90 feet or more above ground he knew what a unique “margin of excellence” was going into this classical structure. So it was this craftsman and his colleagues who produced the fine decorative carvings and helped stamp the Legislative Building with a unique mark. For generations of Washingtonians that “margin of excellence” has reinforced the capitol’s character and quality while also helping to define the state’s ever-evolving democracy.

There’s more to the Alexander McKenzie Munro story. On Bainbridge Island he and his Scottish wife raised ten children. In due course came grandchildren, including a grandson named Ralph. He had arrived in 1943, seven years after Alexander Munro died; but Ralph grew up hearing a good deal about his special grandfather. Ralph, of course, grew up to serve in the great capitol building his grandfather helped build as Washington’s Secretary of State.

Through the years, the state capitol campus has built its own constituency. Countless generations of legislators, their staffs, plus a flood of temporary student pages have been gripped by the thrill of working in and around this classical structure. “This is one cool building and landscape!” exclaims almost every new young page walking the corridors and the park-like setting between the buildings. Statewide officials and their staffs have come under the same spell. They revere the marble halls, the towering dome, the feeling of grandeur, and the magnificent view across Capitol Lake to Budd Inlet and the Olympic Mountains beyond. It’s a feeling shared by the Olympia community, even the news media, and certainly by the guides who host tourists. Also in the limelight in recent decades: the dramatic increase in student visitors who have found new opportunities to learn about government from the hometown legislators, often with an informal bag lunch on the indoor capitol steps and finding their home-county marker along the Arc of Statehood adjacent to Capitol Lake in the North Campus. It’s an educational experience etched in the minds of young people all across Washington.

In the 1950’s, 30 years after Wilder and White finished their project, architect Harry White took up his own vacation tours of the capitol. He joined his close friend and former associate, Jay Johnston, who had represented the New York architects in Olympia during construction days. Revisiting the legislative chambers and chatting with current government leaders, they saw the fulfillment of the early State Capitol Commission’s dreams. In the 1920’s Wilder and White and Jay Johnston had reached with hope and daring to build a dynamic monument to state democracy. Now Harry White and Jay Johnston delighted in the pride they observed everywhere. The “magic” was still in the air!

Another 30 years later Jay Johnston’s son, Professor Norman J. Johnston, was a leading educator in architecture and urban planning at the University of Washington when he decided to research and tell the capitol’s story. In his 1988 authoritative history, Washington’s Audacious State Capitol and Its Builders, Professor Johnston captured the flavor and reality of how the state came to build its remarkable capitol campus.

Johnston’s penetrating study developed fascinating facts. On one point he was very direct: “In contrast to similar efforts in other states, the history of the Legislative Building project was free of scandal…..” In prior years, as Johnston knew, this taint of corruption had been part and parcel of state capitol construction in other states.

In 1911, when the bold project had first been approved, the population of the entire state barely exceeded 800,000. The Legislative Building and other core campus structures in Olympia were funded by timber revenues from the original 1889 federal land grants to the state. No state taxpayer dollars were used.

During the last one hundred years, the Campus has survived three earthquakes and has expanded as envisioned by Wilder and White to include Capitol Lake and the North Capitol Campus Heritage Park. We have much to celebrate as we approach August 3, 2011, the centennial of the adoption of the greatest land use plan for our State Capital City. We need to be ever-vigilant to preserve, protect, and perfect the great Wilder and White plan on its 100th birthday and thereafter.

This entry was posted in Articles and tagged Capital Lake, Capitol Lake, history, Wilder and White. Bookmark the permalink.