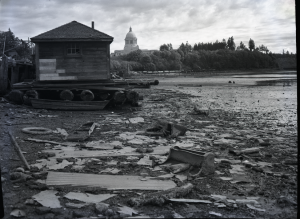 Little Hollywood was the name given to a collection of float houses, businesses, and shanties that occupied the lower end of the Deschutes Estuary in the early part of the 20th century. In the late 1930s, the City began removing the structures, in order to make way for the future Capitol Lake. In this photograph from the early 1940s, a forlorn float house sits on the mud at low tide, with debris left over from previous removals scattered about. The last structures were finally put to the flame in 1942.  Photograph selected and captioned by Deborah Ross on behalf of the Olympia Historical Society and Bigelow House Museum. More information is available at olympiahistory.org. Merle Junk photograph, 1940s, Susan Parish Collection, Southwest Regional Archives