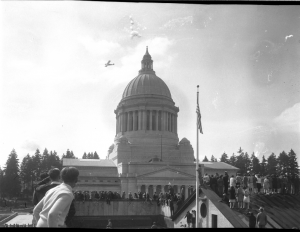 On September 14, 1927, Charles Lindbergh flew his plane, the Spirit of St. Louis, over the relatively new Legislative Building as part of his 48-state tour of the country. Newspaper reports estimate that 1 in 4 Americans witnessed some part of Lindbergh’s tour. According to the Seattle Times, when Lindbergh’s plane reached Olympia, “the plane flew around the dome of the Capitol three times, descending to a low altitude. The flyer then dropped a message of greeting and roared off.”  Washington state was especially proud of the aircraft because it was constructed almost entirely from Western Washington spruce trees. Footage of Lindbergh’s flight over Seattle, the previous day, has only recently been discovered. Photograph selected and captioned by Deborah Ross on behalf of the Olympia Historical Society and Bigelow House Museum. For more information, visit us at olympiahistory.org.