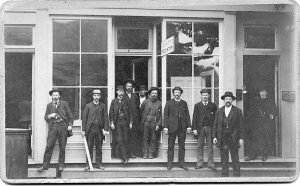 Throughout much of the 19th century, citizens were entitled to claim acreage under a series of federal laws designed to encourage Americans to settle in Western territories and states. As the population of the West grew rapidly in the 1870s and 1880s, United States Land Offices were established to process land claims. A group of early settlers poses here outside the Land Office in downtown Olympia. Photograph selected and captioned by Deborah Ross on behalf of the Olympia Historical Society and Bigelow House Museum.