Partlow: Meet a Family: The Streets and Partlows of West Olympia

Written by Janet Partlow, a descendant of the Streets and Partlow families

Ralph Raymond Streets was born in Brockville, Ontario (on the St. Lawrence seaway) in 1870.  His father John Streets had emigrated to Canada in 1865 from Lincolnshire, England.  John was a shoemaker, and taught the trade to his son, but Ralph had bigger ambitions.  At age 17, he left home for San Diego.

Ralph got to California in  1888, where he met and married Pearl Griswold  (her parents were Ida Wyman and Julius Griswold of  New England Puritan stock). In 1890 he got his American citizenship.  He started working in the lumber trade,  then he and his family went to San Francisco, where their only child Elizabeth was born in 1893.  They flourished in San Francisco, and he continued to rise in the ranks of the lumber business. Sadly in 1902, Pearl died;  Elizabeth was sent to live with her aunt in Nebraska, and Ralph moved to Olympia, taking a steamer ship from San Francisco to Percival landing in November 1902. 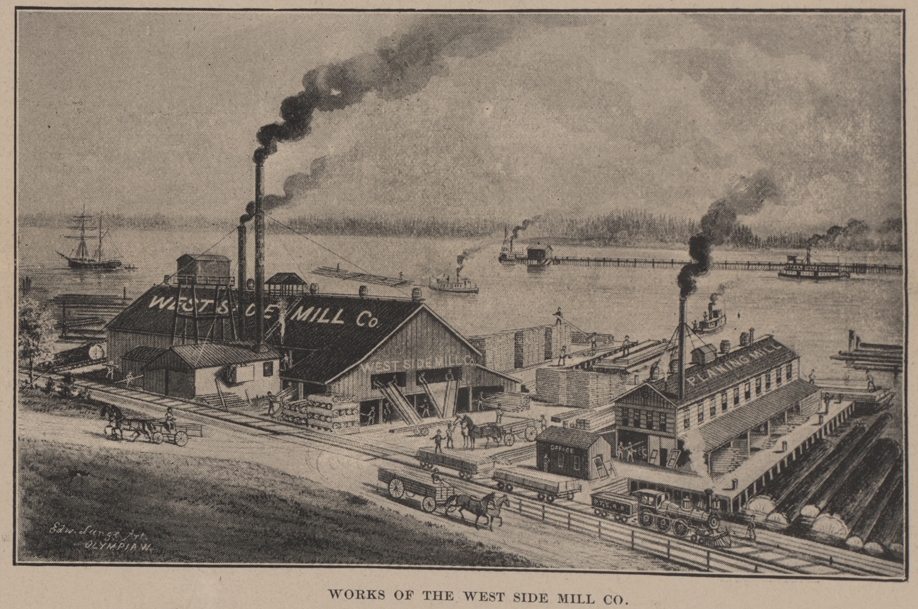 Ralph bought and managed the West Side Mill company.  Later he became a vice-president in  another Olympia waterfront lumber company;  he lived on site at 1306 West Bay Drive, near where the old Hardel company was most recently located.During this time he created the Oldport Kennels, where he raised and sold Airedales.

He remarried in 1904 to Susan Porter;  at this point Elizabeth rejoined the family in Olympia.  Daughters Janet, Suzanne and Mary Louise followed, all born in Olympia.  With a larger family, they needed more house room, so around 1912, Ralph had a house built above the Deschutes estuary (today’s Capitol lake). This house still stands today at 2004 Water Street.

By 1915, the family moved back to San Francisco, except daughter Elizabeth, who stayed to finish her senior year at Olympia High School.  She then married Verne Austin Partlow, Sr and the couple settled in Olympia, where they lived out the rest of their lives.

On his retirement in 1936 from the Little River Redwood Company of California, Ralph and Susan moved back to Seattle, where he died in 1941.

Dr . HW Partlow was born in Eagle, Michigan in 1863 of parents Almond and Mary (Blake) Partlow. He was descended from Scots emigrant John Partelo, who settled on the Hudson river just before the Revolutionary War. John was a Loyalist; the events of the war forced his family to move to the Eastern townships of lower Canada, while his descendants eventually left Canada, moving first into Vermont and New York, and later west to Michigan.

HW was raised on a farm, but as a young man he worked in a drug store, which eventually led him to Detroit Medical College and a career as a physician. He moved to Olympia around August 1908 and continued his general medical practice until his death in 1938.
He was married to Ellen Slattery in 1886 and they had four children: Beulah (Robertson), Kenneth, Verne and Katherine (Draham).

Ellen worked as a milliner; also as a skilled musician (piano) she played for events, which is where she met her husband to be H. W. Partlow. They were married in 1886; they left Eagle, Michigan for Shawano, Wisconsin where he established a medical practice.
They moved to Olympia in the summer of 1908, bringing with them their four children Beulah (Robertson), Kenneth, Verne and Katherine (Draham). Ellen was active in the social and philanthropical life of Olympia. She continued to play and teach piano.
She died in 1953 in Olympia.


This is a continuing newsletter series
that will help you become acquainted with some of the families whose
names you see in our local history, neighborhoods, and street signs.
Their intentional brevity will hopefully pique your curiosity and
consequent research. We welcome contributions from our members and
friends. For additional links to the members of other Olympia area families, please see
the Names section of the website.

This entry was posted in Articles, Summer 2012 and tagged family, Partlow, Street. Bookmark the permalink.