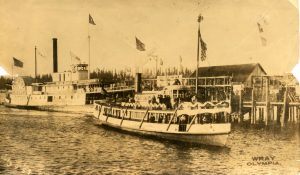 On July 4, 1889 the S.S. T.J. Potter and the S.S. Fleetwood, members of Puget Sound’s Mosquito Fleet, steam into the Port of Olympia. The day was a particularly important one in our state’s history. Besides being our nation’s Independence Day, it was on this day that Washington Territory assembled delegates to begin writing a state constitution. Washington officially became a state on November 11 of that year. For more information see olympiahistory.org.