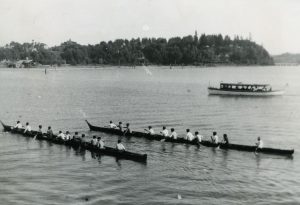 In 1905, the most anticipated event of Olympia’s three-day Independence Day celebration was what was called the Indian canoe race, held in the Deschutes Estuary (now Capitol Lake). According to newspaper accounts, the eleven-man canoes, two of which are shown here, were named the Loon, Reliance Number 2, and Sea Otter. The Sea Otter, captained by Sam Wilson, won the exciting race by a half-length. Photograph selected and captioned by Deborah Ross on behalf of the Olympia Historical Society and Bigelow House Museum.