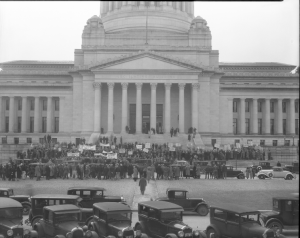 In early March of 1933, a group of about 4,000 men, women, and children marched to Olympia to protest inadequate relief efforts for unemployed and destitute citizens during the Great Depression. After demonstrating at the Legislative Building, the marchers were escorted by sheriffs, Olympia police, and a group of vigilantes to Priest Point Park where they were obligated to camp out in the rain without shelter. Although the march was deemed a failure at the time, it drew attention to the plight of the unemployed and demonstrated the ability of workers to organize and unite in a cause. Photograph selected and captioned by Deborah Ross on behalf of the Olympia Historical Society and Bigelow House Museum. For more information, visit olympiahistory.org.