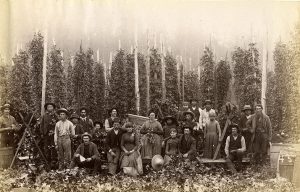 Washington State produces the majority of hops grown in the United States. The crop, used in making beer, was first introduced in Western Washington by pioneer Ezra Meeker. Thurston County hop pickers pose in front of the crop in this photo from about 1889. Most hop pickers of that time were Native American and Chinese. Today, most commercial hops are produced in the Yakima area.  Photograph selected and captioned by Deborah Ross on behalf of the Olympia Historical Society and Bigelow House Museum, olympiahistory.org.