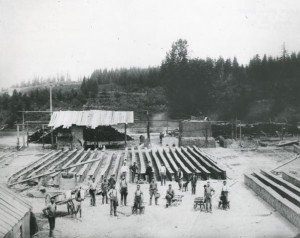 Brickyards existed in and around Olympia from its earliest days. Bricks were made by mining the extensive clay beds around Olympia’s shores, molding them, building wooden kilns to hold them and then setting the kilns on fire. The brickyard at the corner of Fourth and Eastside, shown here in about 1880, was one of at least two on Olympia’s east side. It was owned by the Grimm brothers, and then by William Burchett and Christopher Baker until early in the 20th century. Photograph selected and captioned by Deborah Ross on behalf of Olympia Historical Society and Bigelow House Museum. For more information visit Olympiahistory.org. Washington State Library Collection, Washington State Archives