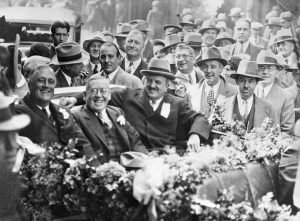 On October 1, 1937, President Franklin D. Roosevelt went on a whirlwind tour of the Olympic Peninsula, and then stopped for a few minutes in Olympia. Rain throughout the day had forced him to tour in a closed-top car for most of the trip, but he quickly changed to an open car just before he reached the capital, accompanied by a rainbow and a throng of spectators. Photograph selected and captioned by Deborah Ross on behalf of the Olympia Historical Society and Bigelow House Museum, olympiahistory.org. Merle Junk photo, 1937, Susan Parish Collection, Washington State Archives