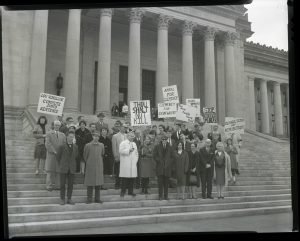 Donald Anthony White, a young Black man, was sentenced to death after being convicted of murder. Protesters against the death penalty, including folk singer Joan Baez, convened on the steps of the Legislative Building in 1964, seeking clemency for White, who had been diagnosed as schizophrenic. He was granted a new trial and his sentence commuted to life in prison. He later graduated from high school and college while in prison. White’s story galvanized the nationwide anti-death penalty movement. Image selected and captioned by Deborah Ross on behalf of the Olympia Historical Society and Bigelow House Museum.  Unknown photographer, 1964, Susan Parish Collection, Washington State Archives