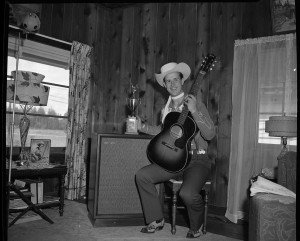 Olympia-born Donald Eugene Ulrich, best known by the stage name Don Rich (August 15, 1941 – July 17, 1974) was a country musician who helped develop the Bakersfield sound in the early 1960s. He was a noted guitarist and fiddler, and a member of the The Buckaroos, the backing band of country singer Buck Owens. Don graduated from Olympia High School in 1959, already having opened for Elvis Presley at the Tacoma Dome at age 16. This photograph was taken in the 1950s or early 1960s at the beginning of his career. Photograph selected and captioned by Deborah Ross on behalf of the Olympia Historical Society and Bigelow House Museum. For more information, visit us at olympiahistory.org.