It is not often that the present so starkly meets the past, but it is actually happening this year. Two relatively recent developments have compellingly confirmed this development.

Most of you are familiar with the first: our own Deborah Ross’s book, Konrad and Albertina, which reconstructs the lives of several individuals who played prominent roles in our community’s history. The Author’s note describes: “With trivial exceptions I have not altered any documented fact or event. However, existing documents give us only a glimpse of “what really happened.” I have written Konrad and Albertina as a work of fiction, allowing me to use my imagination to make the [characters] and the world they lived in come alive.” A prominent geographic setting in Ms. Ross’s work is the homestead of our now famous pioneer George and Isabella Bush.* Though not part of Olympia’s current city limits, and therefore, arguably outside the historical society’s jurisdiction, there may not have been any historical society in any current Thurston County jurisdiction had events described below transpired any differently.

The second development is the Mark and Kathleen Clark’s acquisition of part of the original 1845 homestead of George and Isabella Bush and their recasting it as a working farm. What’s more the newly named Bush Prairie Farm return to its original use is also significant because it now a Community Supported Agriculture allowing those interested to literally enjoy the fruits of the historical farm and its famous soil.

A few selections from Ms. Ross’s heartwarming story put the day and age in context:

Mrs. Bush told Albertina that she and Mr. Bush were the first pioneer wagon train to come across the prairie to the Puget Sound. They were the first Americans in the area, although there were many British Citizens here working for the Hudson’s Bay Company. And yes, Mr. Bush was a Negro. They had moved here to Puget Sound to escape the anti-Negro sentiment in southern Oregon Territory. Albertina was surprised to hear that such a fine family would not be welcome anywhere in their country, and was proud that Konrad had been among the people who helped blacks escape from slavery.

She could tell right away that Mr. Bush must be a very good farmer. Konrad later told her that the Bushes had done better than anyone else in the Sound. They had brought their own seeds across the prairie and had a good supply of grain stored for the coming winter. Their trees were already bearing fruit after only a few years. Mr. Bush said that this was due mostly to the fertile land on the prairie and not his skill as a farmer. Konrad and Albertina though that he was probably being too modest. Mr. Bush said that Mrs. Bush was also a wonderful farmer, famous for the quality of her turkeys and chickens.[i] 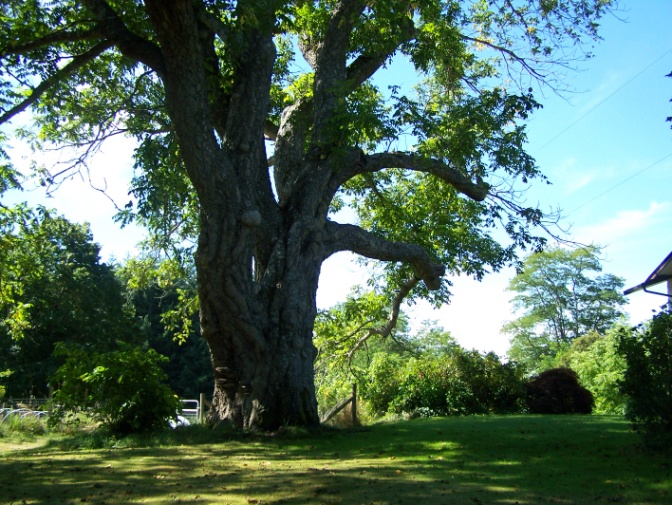 In fact, the healthy fruit trees were described in the first edition of one of Olympia’s nascent newspapers, the Columbian.[iii] A scion of the 165-year old butternut tree planted by Mr. Bush was recently transplanted on the Capitol Campus near the World War II monument. And, the Thurston County Historical Commission presented a paper on the George Bush family at the national African American Historical Research and Preservation Conference held in Seattle on Feb. 5, 2011. While none of the original buildings are standing, the Clarks continue to work with Dale Croes, archaeologist at SPSCC in identifying and preserving artifacts from the farm.

In one of the more precinct passages of the book, Ms. Ross’s imagines a conversation with Mr. Bush’s that many present day Olympians would find prescient and compelling:

“We need skilled farmers to settle here,” Mr. Bush explained. “Folks are arriving all the time, both by land and sea, and many of them aren’t bothering to farm. They just want to start up a commercial business or work for someone else. If we don’t have farmers, though, who is going to feed them all?”[ii]

It’s a fascinating twist to our local history’s development that we see historical farms returned to their original uses and maybe even optimal uses. The question of highest and best use is of paramount, if not singular concern, in the question of the use of land. Viewed as an income producing asset, one could easily question whether food production is the best use of any parcel of land, although without some land allocated to it somewhere, all such questions are undeniably mooted. Our understanding and appreciation for the toil of those who came before us enriches our lives today and enables us to reconsider some of our preconceptions that we constantly take for granted. Wherever any of us fall on these questions, after reading Konrad and Albertina, I cannot help but conclude that Mr. and Mrs. Bush would have been proud to know that the land they worked continues to feed the descendants of those who Mr. Bush himself generously assisted in settling our community.

* Scroll down in the new window that this link will open to see more sources on and Isabella and George Bush.

[iii] Ross, p. 72 while Ross wrote the book as fiction based on actual occurences, the description of the trees in the newspaper is factual.