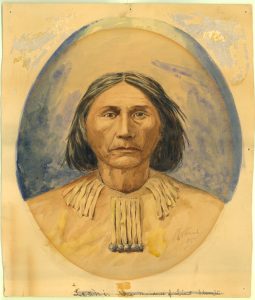 Throughout 2021 we are featuring events and people from the Sylvester’s Window cityscape project, now available online. Leschi, a member of the Nisqually tribe, was designated a leader of the tribe in treaty negotiations after Washington gained territorial status, but refused to sign the Medicine Creek treaty, deeming it inadequate to preserve the Nisqually way of life. He was later judicially murdered for his role in the so-called Indian Wars of the 1850s, but posthumously exonerated in 2004. Image selected and captioned by Deborah Ross. For more information https://olympiahistory.org/1841-cheetwoot/