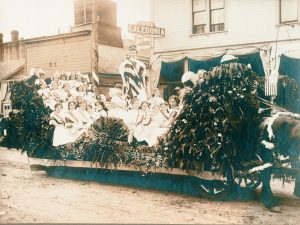 The 1908 Fourth of July parade in downtown Olympia featured a float, dubbed the Liberty Car, promoting the drive for women’s suffrage. Women dressed in white, the emblem of the suffrage movement, wear sashes representing the states, while float queen Mollie Moore is draped in the flag. Women’s Suffrage was passed in Washington State in 1910, and nationally in 1920. Photograph selected and captioned by Deborah Ross on behalf of the Olympia Historical Society and Bigelow House Museum, olympiahistory.org.