Meet the Dohms and Sherwood Press

On October 26, from noon to 7, the Sherwood Press will be hosting an open house at its building on the west side of Olympia, 811 5th Avenue SW. The event honors the tenth anniversary of the death of the press’s founder, Jocelyn Dohm. Current owner Jami Heinrich extends an invitation to the heritage and history community to attend. If you haven’t been inside this historic building, this is a great opportunity to do so. (pleae visit their website at the link above for more information about the event, and a lovely papercutting by Nikki McClure based on the photograph reproduced below.

Here is a little more background on the family and on Jocelyn.

Edward Dohm arrived in Olympia in 1909 after graduation from University of Washington. He had a distinguished civic and military career, serving in World War I and eventually reaching the rank of Brigadier General in the National Guard. He and his wife Estelle built the Dohm House in West Olympia in 1922. It is one of the finest homes in the area, built in a Dutch Colonial style.

Two of Edward and Estelle’s daughters were equally distinguished and important members of the Olympia community. Phyllis Dohm Mueller (Virgie to her family) was an architect who designed the mock-Tudor Kornmesser house at the top of the Fifth Avenue Bridge, among others. Her sister, Jocelyn, founded the Sherwood Press in 1940.

The press began in the basement of the family home, the Dohm House next door. Jocelyn acquired press materials, including an antique platen press and type, in Seattle. The following summer, she and her father built this small house, based on a design by her architect sister Virgie. The building is entirely made of cedar and is heated with a large brick fireplace. 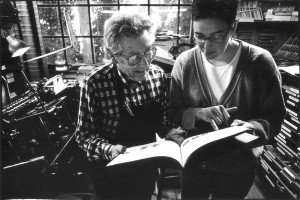 Photograph of Jocelyn and Jamie courtesy of the Sherwood Press.

The items produced by Sherwood Press over the 70+ years of its existence represent what the website characterizes as a “surprising historical account of the history of Olympia, as seen through a sampling of its printed ephemera.” Jocelyn also hosted a long list of high school students who came to work for her as “printer’s devils” (apprentices). One of her apprentices, Jami Heinricher, inherited the business from Jocelyn, who died in 2003.

In addition to her business, Jocelyn and her long-term partner Margery Sayre were very active in local organizations and causes. The home is on the local register and is included in the Women’s History Walking Tour as well as the Olympia Gay and Lesbian History Walking Tour.

For more information on the Sherwood Press, the Kornmesser House, and the Dohm House, visit our website’s Where Are We? pages.

This entry was posted in Uncategorized. Bookmark the permalink.