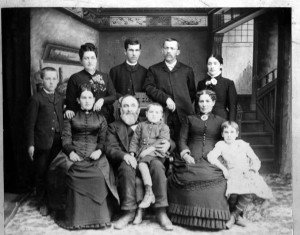 Daniel Richardson Bigelow was born in 1824 in New York State. In 1851, two years after reading law at Harvard, he crossed theOregon Trail. After a short stay in Portland he traveled to the pioneer settlement of Olympia in late 1851. He soon established a law practice, filed a 160 acre Donation Land Claim east of town, and threw himself into local politics.

Ann Elizabeth White was only 14 years old when her family came west from Wisconsin in 1851. They settled on Chambers Prairie southeast of Olympia and by 1853 Ann was employed as a school teacher in the Packwood home in the Nisqually Delta area near Olympia.

In 1854, Elizabeth and Daniel married and began married life in a two-room cabin he built on his land claim just east of downtown Olympia. Soon afterwards they built their neat two-story Carpenter Gothic home where they raised their eight children.

Daniel was among the first settlers to call for the separation of Washington from Oregon Territory. He served as a Councilman representing Thurston County in the Washington Territorial legislature from 1854-56 and as a Representative in 1871.  He also held a number of other public offices during his long career.

He and Elizabeth were devout Methodists and helped organize the Methodist Episcopal Church in Olympia. They were also active proponents of public education, rights for non whites,women’s suffrage and temperance.

This entry was posted in Uncategorized. Bookmark the permalink.