The Olympia Historical Society & Bigelow House Museum is now selling a limited number of a wonderful book about local maritime heritage: Tugs and Other Hard-Working Vessels of Puget Sound:  A Scrapbook from the Earlier Days, by Olympia native and naval architect and marine engineer, the late Norman R.  Knutsen.  The book is being made available through the generosity of the Knutsen Family.  The softbound, 345 page book, is extensively illustrated, including many rare images of Olympia maritime history.  The book, with the net proceeds benefitting the Olympia Historical Society & Bigelow House Museum, is available by mail only with credit or debit card or PayPal account, and sells for $48.08 including postage, handling and sales tax.  To order your copy, click Here. Note that although this takes you to PayPal, a PayPal account not required for purchase! 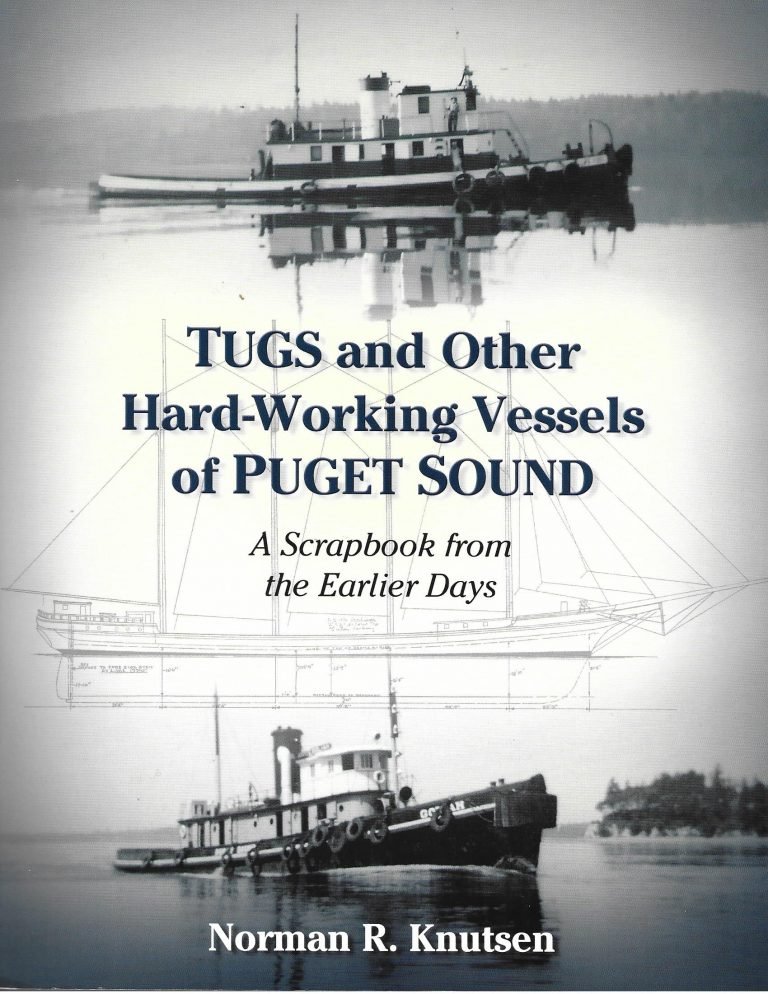 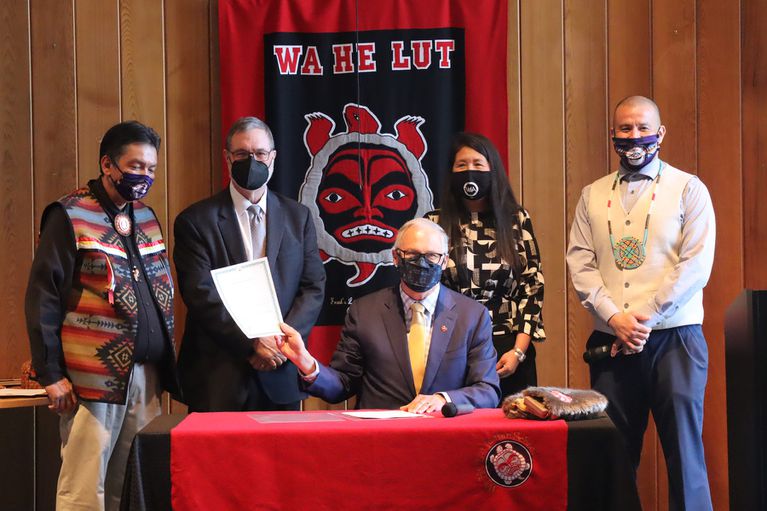 Governor Jay Inslee has signed HB 1372 – 2021-22, which will place a statue of Nisqually treaty rights advocate Billy Frank Jr. in the U.S. Capitol. Each state is allowed two statues in the Capitol’s Statuary Hall, Frank’s will replace an existing statue of Oregon Trail pioneer Marcus Whitman, which has stood in the Capitol for approximately 70 years. Billy Frank Jr. died in 2014 at the age of 83. In his younger years, he was a self-described “getting arrested guy” at treaty fishing rights protests, which eventually led to the Boldt Decision, a 1974 federal court case that reaffirmed tribal rights. In later decades, Frank became a widely admired advocate for Northwest salmon and natural resource protection. Inslee and other state officials were ushered into the school by Nisqually drummers and singers wearing hand-sewn regalia. Numerous relatives and descendants of Frank attended the signing ceremony and sat beneath a mounted, weathered dugout canoe paddled by their elder when he was young. “He’d be happy to see this,” said Willie Frank III, speaking of his father, at the bill signing ceremony. “But he’d also tell all of us up here on the stage that we’re not done. We’re a long ways from being done. We have a lot more work to do.” Inslee signed Democratic state Rep. Debra Lekanoff’s bill at the Wa He Lut Indian School on the banks of the Nisqually River near Olympia, near where the Frank family had once lived.

Washington state’s second presence in the Capitol statuary collection is a 1980 casting of Mother Joseph, a 19th century Catholic nun who was responsible for the construction of hospitals, schools and orphanages throughout the Northwest. 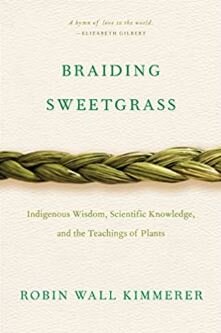 As a botanist, Robin Wall Kimmerer has been trained to ask questions of nature with the tools of science. As a member of the Citizen Potawatomi Nation, she embraces the notion that plants and animals are our oldest teachers. In Braiding Sweetgrass, Kimmerer brings these two lenses of knowledge together to take us on “a journey that is every bit as mythic as it is scientific, as sacred as it is historical, as clever as it is wise”. Drawing on her life as an indigenous scientist, and as a woman, Kimmerer shows how other living beings―asters and goldenrod, strawberries and squash, salamanders, algae, and sweetgrass―offer us gifts and lessons, even if we’ve forgotten how to hear their voices. In reflections that range from the creation of Turtle Island to the forces that threaten its flourishing today, she circles toward a central argument: that the awakening of ecological consciousness requires the acknowledgment and celebration of our reciprocal relationship with the rest of the living world. For only when we can hear the languages of other beings will we be capable of understanding the generosity of the earth, and learn to give our own gifts in return. This event is FREE and open to the public. For questions, please contact Cindy Hackett at cynthia.hale.hackett@gmail.com . ZOOM event information will be provided the weekend prior to the event, visit Here for more details.

Join Fort Nisqually for a program on tinsmithing – learn about basic tools and techniques of 19th century tinsmithing and tin objects from Fort Nisqually Living History Museum’s collection. The program will include a demonstration of how tin cups were made by hand and how the process changed with the introduction of simple machines.
The Fort from Home series brings the talents and expertise of Fort Nisqually interpreters to audiences through live, interactive virtual programming. For more information and to register, visit Tickets. 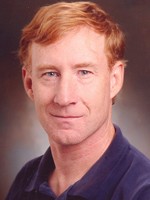 Historian Joseph Taylor
Narratives about the past usually trace change over time, but legal proceedings insist on the opposite: the past is fixed in time and place. For historians, the demands are very different when writing for this standard. Contexts are narrow and specific. All that matters is the moment. What happened later is irrelevant. In this virtual event, historian Joseph Taylor will discuss how he addressed these demands while working as an expert witness in U.S. et al. v. Washington, commonly called the “Culvert Case.” He will explain the challenges of reconstructing ecological and cultural conditions at the time of the Stevens treaties in 1854 and 1855, as well as the implications of this form of history on how we understand our own times. To register for this free event, visit Here.

Joseph Taylor grew up in California and Oregon, and has worked in the area as a commercial fisherman and truck driver. A graduate of the University of Washington (1996), his primary fields of research in the last ten years have been in environmental history and the history of western North America. Taylor is currently a professor at Simon Fraser University in Canada. 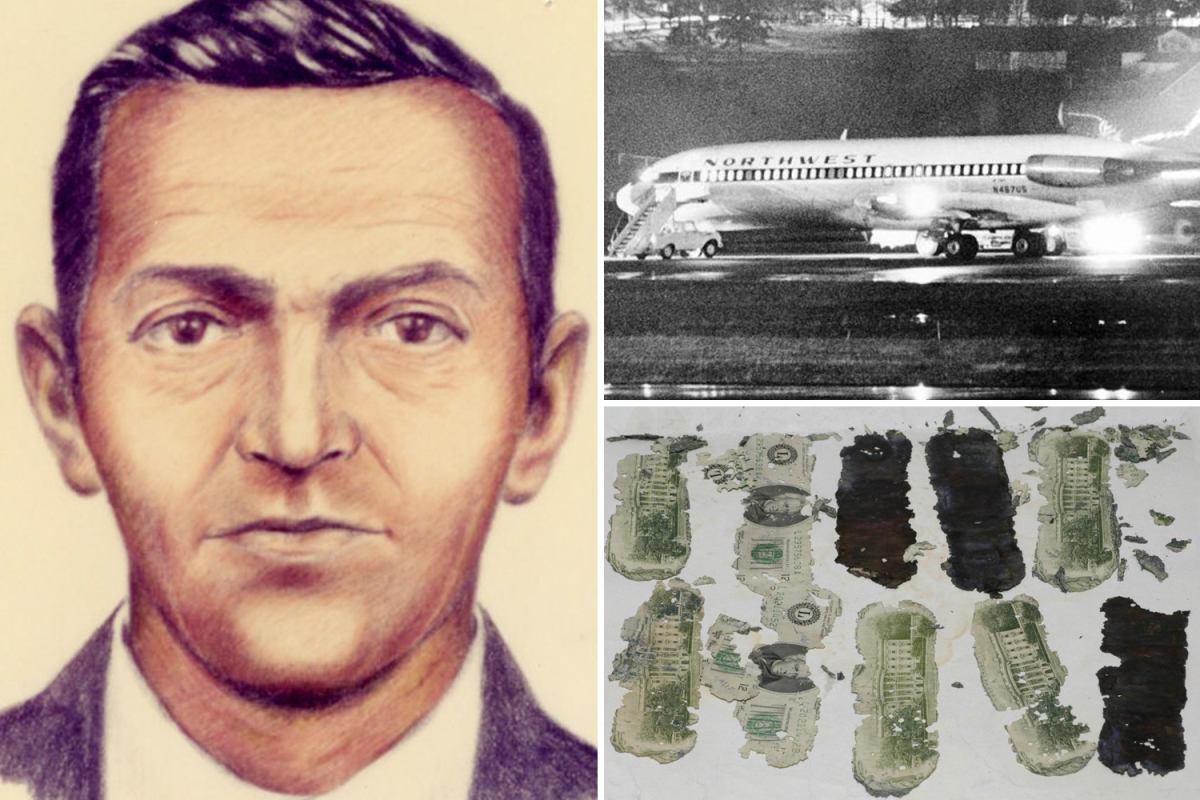 D.B.Cooper, the hijacked plane and some recovered cash.
Alive or deceased? Disgruntled or ingenious? Folk hero or terrorist? This program explores the layers of myth and mystery surrounding the 1971 hijacking of Northwest Orient Flight 305 and the enigmatic figure at that story’s center. See material released by the FBI and hear harrowing first-hand accounts of crisis decision making from that Thanksgiving eve flight. Learn how to make D.B. Cooper’s favorite mixed drink, review fashions from the time period, and decide if you think a human could survive a mid-flight jettison from a Boeing 727 aft staircase. Included in your ticket purchase is a downloadable event kit with the cocktail recipe so you can prep the ingredients, as well as items to get you ready for other History After Hours activities! This event is limited to those 21 and over. For more information, visit Tickets.

Join Fort Nisqually Interpreter, Tug, for a discussion on early steam navigation on the Puget Sound. Tug will share the history of three historic vessels, the Beaver, Otter, and Fairy and present his hand made model of the steamer Fairy and other artifacts. For more information and to register, visit Tickets. 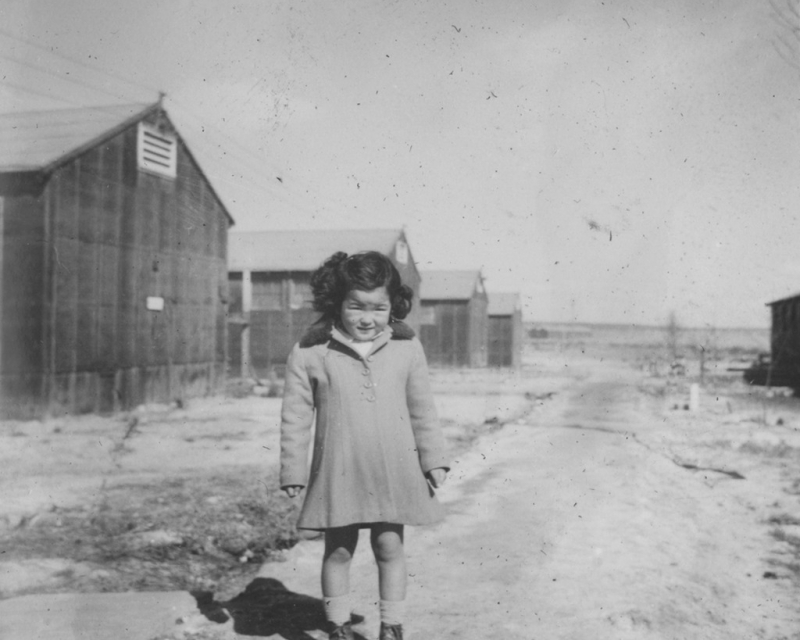 Join the WSHS online to see a performance of Never again: The story of the Japanese American incarceration, presented by Dukesbay Productions. The play features a collection of first-person stories of people who were forced into incarceration camps during World War II. Over the course of several scenes, five actors will bring this powerful history to life. Tacoma-based actor, producer, co-founder of Dukesbay Productions, and descendant of World War II incarceration Aya Hashiguchi Clark edited and directed the play. She researched and identified the stories of the individuals featured in this production through Densho, a grassroots organization dedicated to preserving, educating, and sharing the story of World War II-era incarceration of Japanese Americans. This program will be live streamed on Facebook, but you do not need a Facebook account to access it. The live program is viewable for everyone. Click  Here to see the program when it begins at 5 PM on May 20, 2021. For more information about this program and how to view, as well as suggestions for FREE! wifi, visit Here.
Join WSHS for a panel discussion about the history and meaning of U.S. government surveillance of Japanese Americans and World War II incarceration, in the context of  contemporary issues of anti-Asian violence, immigration and labor, private detention centers, and border patrol. Informed by history, the panel will address relevant questions about democracy and civil liberties, neoliberal policies, citizenship, and American identity. Panelists will also consider the possibilities of solidarity between social justice movements for freedom and equality, including Black Lives Matter. Click Watch Here to see the program when it begins at 7 PM on May 20, 2021. For more information on connecting, as well as a full participants and their backgrounds, visit Here.

Join David Williams, author of the new book Homewaters: A Human and Natural History of Puget Sound for an interview with Claire Keller-Scholz, Art, Culture, & Heritage Administrator at Metro Parks Tacoma and former Curator at Fort Nisqually Living History Museum. Williams research, including at the Museum’s archives and library, sheds new light on Fort Nisqually’s relationship to the Puget Sound. Homewaters weaves history and science into a fascinating and hopeful narrative, one that will introduce newcomers to the astonishing life that inhabits the Sound and offers longtime residents new insight into and appreciation of the waters they call home. Not far from Seattle skyscrapers live 150-year-old clams, more than 250 species of fish, and underwater kelp forests as complex as any terrestrial ecosystem. For millennia, vibrant Coast Salish communities have lived beside these waters dense with nutrient-rich foods, with cultures intertwined through exchanges across the waterways. Transformed by settlement and resource extraction, Puget Sound and its future health now depend on a better understanding of the region’s ecological complexities. Focusing on the area south of Port Townsend and between the Cascade and Olympic mountains, Williams uncovers human and natural histories in, on, and around the Sound. In conversations with archaeologists, biologists, and tribal authorities, Williams traces how generations of humans have interacted with such species as geoducks, salmon, orcas, rockfish, and herring. He sheds light on how warfare shaped development and how people have moved across this maritime highway, in canoes, the mosquito fleet, and today’s ferry system. The book also takes an unflinching look at how the Sound’s ecosystems have suffered from human behavior, including pollution, habitat destruction, and the effects of climate change. For more information and to register for this event, visit Tickets. 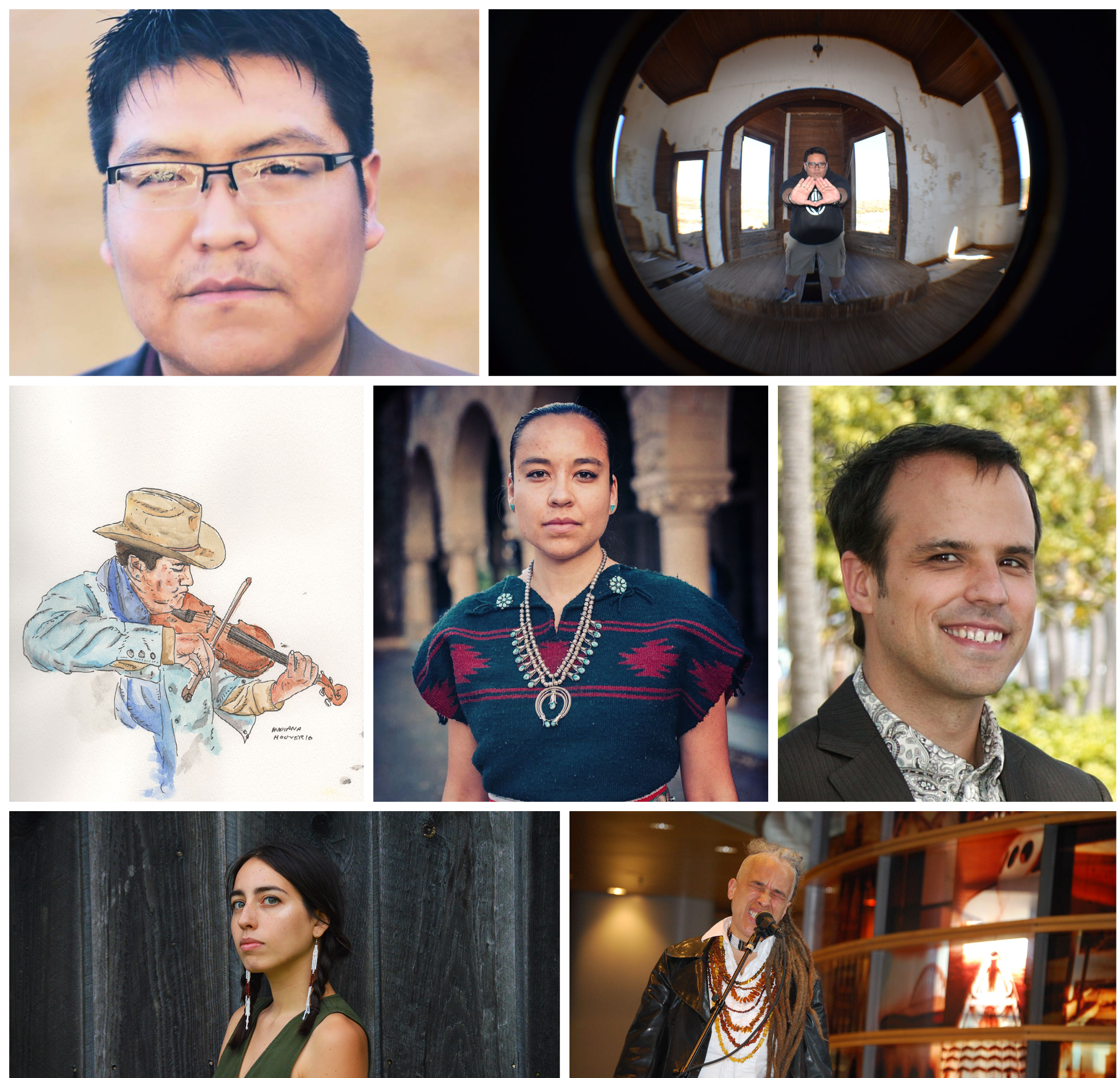 Welcome to Indian Country features an all Native American cast who offer seven songs and seven stories about life, love, connecting to culture, survival and resilience. This show exemplifies the vibrant life of modern Native people as well as honors ancestors. In partnership with Indigenous Performance Productions, the Washington Center is providing technical theater support and regional partnership on the co-creation of Welcome to Indian Country. This effort is supported in part by grants from Washington Women’s Foundation, City of Olympia, and the Nisqually Indian Tribe. The Washington Center Main Stage is located at 512 Washington St. SE, Olympia. For more information visit Here, or contact 360-753-8586.
This entry was posted in 2021 Bulletins. Bookmark the permalink.